There’s something disproportionately sad about an abandoned work of industry. A vacant run down factory. Or a boarded up store, or empty hotel. It’s  more than the decay and disrepair. More than the esthetic blight. It’s hard to put your finger on it but seeing it evokes a strong emotional reaction, if you’re prone to those sorts of things. That’s what you feel when you stumble across one. They’re monuments to the mortality of enterprise. Where something was once a buzz of activity but is now silent.  It once represented someone’s work in action-a machine of human industry. Supplying value to shareholders and opportunity to the community in harmony.  A living organism of mankind’s effort to sustain and progress.

Until it died. And the death is what you see. And what you feel. Someone somewhere had hopes beyond this end. Those hopes died too.  Someone had to uphold the obligation of the loser in the game of investment.  That’s how it works. It’s a cycle.

Beyond the lost profits though, there’s a community that shoulders the fallout. There are those who didn’t invest yet still lost. Industry is more than the balance sheet. It’s people.  And towns.

I don’t get back to Atlantic City, where I grew up, very often.  There’s 2,800 miles between there and my life now.  And years.  It’s more the years than the distance that separates me from it now.  But when I do go back, like I did this past weekend, I make it a point to go back to those places where I spent my youth-right in the teeth of the beast, on the beach and the boardwalk.  It’s a unique combination of resort and urban grit that you can only find in Atlantic City.  Especially at the north end.  Where it’s really old.  And really tough.

I grew up with the homeless,  mentally ill and addicted that live under the boardwalk there.  My father, a lifeguard on the Atlantic City Beach Patrol used to keep me around the station to run errands for the other guards.  They called it being a “mascot”.  Far too young to responsibly do it, I’d wander up the boardwalk, lunch orders in hand talking to the familiar burnt out occupants of that unique brand of skid row.  Those were my earliest memories.  And though they don’t sound fond, they are. If for no other reasons than it’s home.  Home is our first memories.  And the human condition craves it.

So when I parked my rental car and set off on foot, cheese steak sub under my arm, I wandered up to my old beach.  The one that I got to work when I was finally old enough to be a guard myself.  I wanted to sit and watch it. The way I used to.  The way that it was.

I found myself walking through the remains of the towering Trump Plaza Hotel and Casino on my way to the boardwalk. 25 years ago, when I worked the beach on Georgia Avenue, its shadow loomed over the surf.  The deafening music from the deck above the casino blared in our ears all day.  It was menacing.  And active.

The shadow is still there.  But the activity is gone.

The Plaza is dead. It closed two years ago  destroying itself, thousands of jobs and millions of tax dollars with it. Three other casinos have also closed since.  Thousands more jobs, millions more tax dollars went with them.  The city is bankrupt.  The local economy is shot.  And the people are just trying to get through.

I was walking through failure’s art.

I could feel it in my gut when I walked through the old valet parking entrance, past the once bustling lobby and up onto the boardwalk, empty on the cold day, wind blowing hard from the north end, storm clouds moving quickly over the top of me.  It felt apocalyptic.

The easy thing to do here would be to draw a straight line from the failure of that building to the man whose name used to grace it.  You can still clearly see the outlines of the letters on the decaying facades.  Trump…
This was all his. 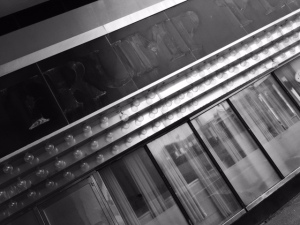 I’m not going to do that though.  Blame does little in the face of such crippling destitution. After all, this was business.  And business has a cycle and a purpose.  And though others have taken up the task of chronicling Trump’s path along this journey that ended in the bones of his casino laying bare in wind and the rain, I’ll leave that to them. Instead I’ll deliver a very simple message of contrast.  And ask you to do the rest for yourself.

As I shook off the dark feeling of failure, walking under the walkway from the garage that had no cars to the hotel that had no guests, I walked a few hundred yards south and sat down on a bench to eat.  I soaked it all in.

The view was very different a stones throw away. Now, a titan stood in front of me.  A massive relic from the days when men built things of steel and stone-Boardwalk Hall, the marvel of architecture that served as convention center for the city until the 90’s and has served as a bustling entertainment venue since.

Carved into the limestone facade facing the Atlantic Ocean since it’s construction in 1929 was something I never noticed before.  I worked the beach in front of it eight hours a day, six days a week for two years.  And I never noticed it.  Perhaps it was the abandoned lot to the south of it, another one of Trump’s old hotels torn down years ago.  Or the abandoned building to the north of it, the Plaza I just walked through that made the words stand out.  In letters as tall as a man across its 300-foot face there’s an inscription.

“A permanent monument conceived as a tribute to the ideals of Atlantic City, built by its citizens and dedicated to recreation, social progress and industrial achievements.”

On the north tower are the words. “education, science, conventions, art, industry”.

My high school graduation was in that building.  So was my brother’s and thousands of others.  My dad played football there.  The 1964 Democratic National Convention was held there, less than a year after JFK was shot. LBJ was nominated.  The Beatles played there in 1964. The Stones came later.  Mike Tyson knocked out Larry Holmes and Michael Spinks there.  The list is long and storied but I’ll stop there to make my point. 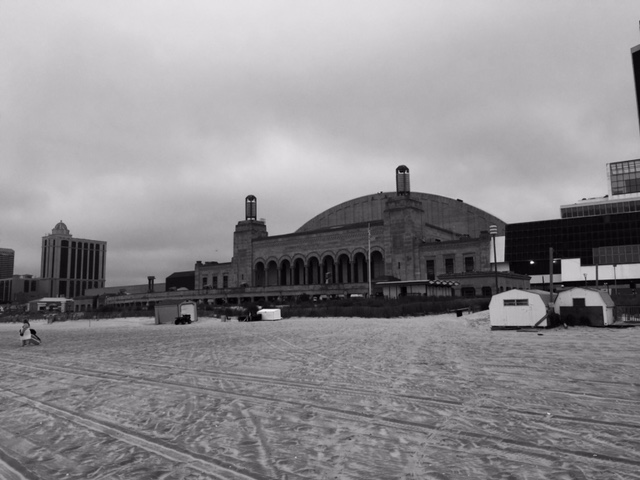 That building has made good on the promise of its inscription. And here’s the contrast and the lesson in that three blocks of boardwalk. Business and profits alone are not what a society is built on. They’re a means to an end. An important one. But not the goal. A society is built on sustainment. On education, science, art, industry…festivities and all.  A society is its citizens, its ideals, its industrial achievement. The things carved into that permanent structure, flanked by the failure of quick profit and personal gain. Those words represent the heart and soul of a people. And they endure.

If you’re going to raise your hand and lay claim to the responsibility of serving and leading them, and the distinction between the roles profit and societal progress isn’t clear to you, then I’d ask you to take a stroll down a few hundred yards of boardwalk in my home town. The difference is crisp. And the lesson is clear.

A society doesn’t win.  It lives.  And progresses.  Together.  And it’s leaders serve.  Not profit.